We do more than just vaccines 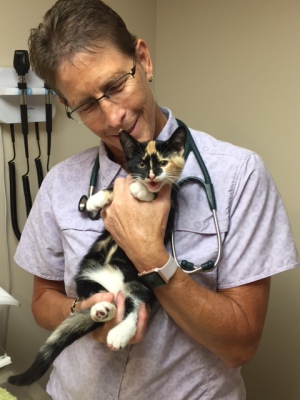 At WagMore we do more than just vaccines. Your visit starts with a friendly greeting from our courteous staff. You will be impressed by how professional and attentive WagMore is at meeting your pet’s needs. From the moment we meet your pet our staff is trained to carefully observe your pet and recognize potential health concerns.

HISTORY — Your pet’s visit starts with a thorough health history by our trained technical staff. Key questions are asked to flag any changes or behavior that may indicate further investigation is needed. Your pet is weighed and body scored. A body score of 5/9 is optimal and associated with a 15% longer life span. Many owners do not realize that their pet is overweight and at risk for diseases such as diabetes, arthritis and cancer as a result. We take the time to teach you to assess your pets’ body score and develop a plan to meet a healthy weight goal.

COMPREHENSIVE EXAM — An experienced, licensed veterinarian will do a comprehensive physical exam. Starting from the tip of the nose to the end of the tail, your pet’s major body systems are examined. The physical exam is so important in veterinary medicine because it is a way your pet can communicate that all is well or something needs to be looked at more closely.

RECOMMENDATIONS / TREATMENT — After the comprehensive physical exam we will discuss a treatment plan tailored to your pet’s needs. Our recommendations are based on current, evidence based science. We follow the recommendations of the Center for Disease Control (CDC), The American Heartworm Society, The American Association of Feline Practitioners Guidelines, and The American Animal Hospital Association (AAHA) for parasite prevention, canine and feline vaccination guidelines and practicing a high standard of medical care. In other words, we offer you the best, most current recommendations for your pet!

What follows is a detailed explanation of the key components to a physical exam. Keep in mind a skilled veterinarian is observing much more than this.

Your pet’s posture, movement and weight bearing are evaluated. Many times there are subtle changes that tip the veterinarian your pet may be experiencing pain, discomfort or metabolic weakness.

The skin and coat quality are evaluated. There are changes to the skin that may indicate poor diet, ectoparasites, atopy/allergies, and endocrine disease such as thyroid or adrenal diseases.

A thorough exam also includes feeling the skin, subcutaneous space and the deeper muscle and bone tissue for any abnormal growths or changes in density, shape or consistency. A fine needle aspirate of any abnormal areas can be done immediately and evaluated microscopically in an effort to classify the cell type. We can then advise you whether the mass should be removed and biopsied or watched over time.

While it may not look like much more than a deep belly massage is happening, our veterinarian is gathering a wealth of important information regarding your pet’s health during the abdominal palpation. In most relaxed animals the major abdominal organs can be assessed during this part of the exam. The spleen, liver, kidneys, bladder and gastrointestinal tract are felt in an attempt to determine their size, shape and consistency. Abnormalities such as ascites (abdominal fluid), tumors, bladder stones and enlarged lymph nodes may be found.

A healthy mouth is a healthy body. Most of our pets don’t brush and floss each day and as a result have significant dental disease. A good oral exam can reveal painful gingivitis, fractured teeth, tooth root abscesses, cavities and oral tumors. The majority of owners are not aware of how much discomfort their pet is having until we address the problem. Dental disease can also cause problems in other vital organs including the heart, kidneys and liver.

There are several lymph nodes that are palpable on an exam that may indicate local or systemic disease. You pets mandibular, prescapular, axillary, inguinal, popliteal and when possible, sublumbar lymph nodes are felt to be sure they are normal size and consistency.

Your pet’s breathing rate and effort, along with the perfusion of the mucous membranes are observed. The lung fields are auscultated with a stethoscope for any changes in the lower and upper respiratory tract. Chronic diseases such as bronchitis, heart disease, metastatic cancer may be insidious and sometimes without obvious symptoms to the untrained eye.

Your pet’s neurological status is also assessed during the physical exam. Subtle changes in facial expression, tongue position, pupillary light reflex along with posture and gait changes may indicate that further evaluation of the central nervous system or peripheral nerves are necessary. It is always beneficial to localize and find disease before it has caused major changes or illness.

The eyes are “a window” to many diseases. Corneal changes may indicate painful diseases such as distichia, ectopic cilia, Keratoconjunctivitis sicca (dry eye), and corneal ulcers. A thorough ocular exam with an ophthalmoscope evaluates the fundus, optic nerve and vascular supply. An abnormal evaluation may indicate ocular diseases such as glaucoma or systemic diseases such as hypertension and kidney disease. Observing pupillary light reflexes evaluates for neural health and diseases such tumors.

Joints and range of motion

Our pets age at a much faster pace than we do. So it is not surprising that a seemingly young dog may already have evidence of osteoarthritis. The major joints are felt and put through normal range of motion to evaluate for tendon or ligament disease along with osteoarthritis. The long bones are felt and stressed to rule out developmental disease and bone tumors. Supplements such as Omega 3 fatty acids, glucosamine, chondroitin and MSM may be beneficial to your pet to maintain healthy joints and prevent worsening disease.

The evaluation of the heart on physical exam requires a stethoscope and an experienced ear. The heart valves are listened to for any evidence of abnormal flow or a heart murmur. The heart rate and rhythm are observed as well as the pulse quality. Early detection of heart disease can be managed with medication and result in longer quality of life for many pets.

We offer in-house blood work with the newest technology and state of the art chemistry and complete blood cell count analyzer. You will have results before you leave your appointment so there is no anxiety of waiting for results, unnecessary stress or playing phone tag. If something more needs to be done or looked at more closely you will know before you leave and you will have all your questions and concerns answered. Routine screening and early intervention are important for a lifetime of good health.

During your appointment, a simple blood test can screen your dog for heartworm disease and three of the most prominent tick borne diseases in this area: Lyme, Anaplasma and Ehrlichia. We will give you results in 10 minutes and if needed discuss a treatment stategy. If caught early and properly treated, the outcome for these infections is usually very good for a full recovery. Additionally, we can screen your cat for heartworm, leukemia and FIV (a feline form of HIV found in people). Again, early intervention usually provides the best prognosis.

We have a close partnership with IDEXX Reference Laboratories, the industry leader in diagnostic innovation, support, and education. This means we can offer complimentary consultations from board-certified veterinary specialists and pathologists regarding your pet’s lab work and treatment plan if necessary. You can find comfort in knowing that if your pet is sick, you have a team of professionals working to make your pet better and offer you the best care possible. 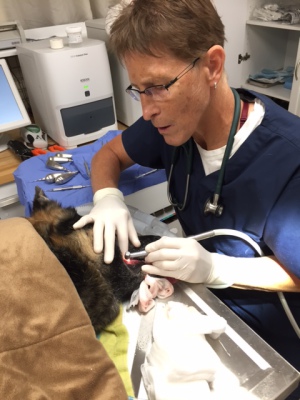 At WagMore, we know there is immense trust between you and your veterinarian. We appreciate that when your pet needs surgery you prefer to have the veterinarian you have developed a close relationship with and whom you trust to do that procedure.

We offer our clients in-house surgery and dentistry. Dr Kucia is proficient in many types of surgery including but not limited to ovariohysterectomy, castration, soft tissue surgery, ocular surgery, bladder surgery, gastointestinal surgery and dental surgery. Your pet will also appreciate the familiar surroundings, the calm, relaxing environment, and the friendly faces at WagMore. 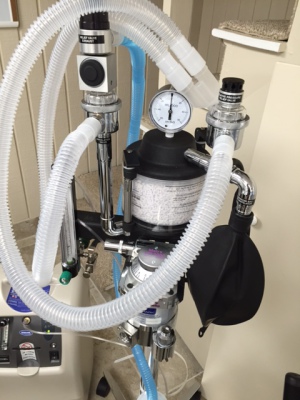 At WagMore, your pet’s safety and wellbeing always come first. Should your pet need surgery or dentistry we have the know how and the proper equipment needed to assure your pets procedure is as safe as possible. We have invested in reliable, innovative, superior quality surgical and anesthesia equipment.

No detail is too small when safety is a concern. We require a chemistry, complete blood count and physical exam be done to assure that it is safe for your pet to have anesthesia. Additionally, your pet will have an intravenous catheter placed, IV fluid therapy, blood pressure monitor, ECG monitor, pulse oximetry monitor, temperature monitor and most importantly a skilled staff monitoring your pet until she/he is extubated and able to sit up on their own.

We practice balanced anesthesia and excellent pain management, so your pet will be comfortable and have improved healing time. You pet is worth the best and at WagMore we always give our very best. 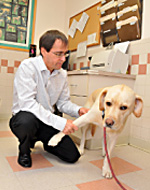 Dr. Robert Rob McCarthy is a veterinary surgeon specializing in both orthopedic and soft tissue surgery. Although he works primarily with companion small animals, he also performs surgery on exotic, wildlife and zoo animals. He has a special interest in minimally invasive surgery (laparoscopy, arthroscopy) of all types.

Dr. McCarthy grew up in Natick, MA, and first became interested in veterinary medicine while he was an undergraduate student at Boston College. He was offered admission to both veterinary and medical school, but decided to pursue veterinary medicine at Tufts, where he earned his degree in 1983 as a member of the school’s first graduating class. He served on the faculty of Louisiana State University and earned a master’s degree from the University of Minnesota prior to returning to Tufts as a faculty member in 1993. The Cummings School of Veterinary Medicine has the best clinical programs, small animal hospital, faculty and staff of any veterinary school in the country, he says. From my perspective, this is a perfect job.

Dr. McCarthy’s notable cases range from fracture repairs on bald eagles, turkey vultures and hawks at the Tufts Wildlife Clinic, to a penguin at the New England Aquarium, and a wallaby and cheetah at the Roger Williams Zoo in Rhode Island. Most recently, Dr.McCarthy has begun performing minimally invasive laparoscopic spay surgeries on large dogs and other animals; among his first patients were two tigers from Southwick’s Zoo in nearby Mendon, MA.

Dr. McCarthy has lectured on small animal surgery at meetings from Puerto Rico to Australia and in all corners of the United States. He has a strong interest in feral cat management and has coordinated a trap-neuter-release program on Virgin Gorda in the British Virgin Islands for the past several years.

Dr. McCarthy lives in Grafton with his wife, Paula, a part-time staff member at the Wildlife Clinic. The couple has two children, Sara and Nick, and share their home with two cats and three dogs — two of whom were rescues. He plays tennis and soccer as often as he can and is an avid SCUBA diver.

Ultrasound for a gentle, non-invasive view

There may be a time in your pet’s life that we need to get a closer look to diagnose disease. WagMore will always try to offer you and your pet the least invasive way to get an answer. An abdominal ultrasound is a painless, non-invasive test that can give us a wealth of knowledge regarding your pet’s health. A ultrasound probe is placed against your pet’s belly allowing images of the internal organs to be studied. We are able to not only see the size and shape of the organs in the abdomen but also the inside of the organs. A comprehensive ultrasound evaluates the liver, spleen, kidneys, gastrointestinal tract, bladder, prostate, adrenal glands and lymph nodes. This test is invaluable when we are dealing with a patient that can not verbally communicate.